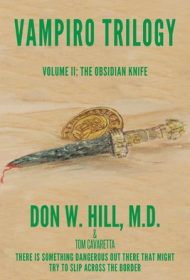 The second installment of Don W. Hill’s and Tom Cavaretta’s Vampiro Trilogy (after The Night Crawler Protocol) continues the story of a vampire outbreak in the Southwest—caused by a virus spread by chickens—that threatens the world.

Set in the 1980s, the story revolves largely around Blake Barker, a hardware store manager whose life has been decimated by tragedy. A vampire named Romero Lopes has killed his beloved wife, and his housekeeper Lorena, a curandera (folk healer), has disappeared with his young son Nathan. Barker just lost his job and—worse—finds himself turning into a bloodsucker! Vowing to find Lorena and his son and also track down Lopes to avenge his wife’s murder, Barker embarks on a quest that leads him into Mexico and perilous drug cartel territory.

Meanwhile, Lorena, who has two rare obsidian blades that are deadly to vampires, is on a strange journey of self-discovery that leads her into the Yucatán jungles; Lopes seeks to retrieve his blade—and become the powerful overlord he feels destined to become; and CDC and government agents are desperately trying to catch a live vampire to help them create a vaccine for the virus, among other missions.

Vampire fiction can be disappointingly formulaic, but the authors’ use of Mesoamerican myth coupled with the unusual method of vampire transmission make this a unique read. The multiple storylines are seamlessly intertwined, creating a fast-paced and action-packed narrative.

While the unapologetic gore works here, sometimes it becomes gratuitous (amputating victims’ limbs and using the living bodies as bases in a softball game). Additionally, occasionally the story’s irreverent humor crosses the line, as when a male character discusses being raped while imprisoned by a Mexican cartel: “…I was getting affectionately probed up the backside by his nasty one-eyed trouser snake.” Lastly, the amateurish illustrations undermine the well-written narrative.

Despite these drawbacks, adventurous vampire fiction fans should enjoy this read, which is definitely not for the faint of heart!