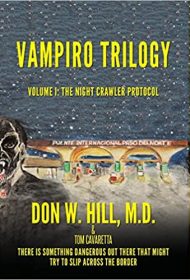 This comedic mashup of horror and fantasy, the first of the Vampiro trilogy by authors Don W. Hill and Tom Cavaretta, details a vampire outbreak in New Mexico in which vampirism is a disease spread by chickens, who are carriers.

The story revolves around Blake Barker; his wife Lynne; their 5-year-old son Nathan; and the family’s au pair, Lorena who is also a local curandera or healer.

Blake had managed a Woolworth store when he unknowingly encountered the vampires’ first victim: a hippie-guru named Jody who died in the lotus position outside the store. The last person to speak to Jody, Blake became so sought-after by Jody’s followers that he moves his family out of town. However, he now finds one of Jody’s followers named Ruby outside the hardware store he manages. She has his antique obsidian knife in her hand, but she didn’t kill herself; she was killed by a vampire.

After a long absence, infected vampires are again terrorizing people in New Mexico. Blake’s family seems particularly targeted, and federal investigators have tracked down part of the infection to his chicken coop. But it’s not the soldiers or feds who uncover what’s happening; it’s Lorena who emerges as the tale’s heroine.

Hill and Cavaretta pack wry, yet long-winded descriptions into the story. For example, just before Blake meets Ruby, they write: “At the time, Blake Barker happened to be busy with a broom and dustpan, sweeping up the earthly remains of one of the shop’s overhead fluorescent light bulbs that had apparently committed suicide, spontaneously exploding and showering small shards of glass all over aisle number six, right between the display of various outdoor insecticides and the hefty fifty-pound bags of garden fertilizer.”

But while descriptions of mundane actions abound, the authors sometimes gloss over important subjects, like the obsidian knife that mysteriously appeared in Ruby’s hand. Similarly, the writing style occasionally muddles the plot and distracts, as with passages of real science, like three paragraphs on how birds transmit diseases to humans.

Despite such issues, the humor is largely entertaining, and fans of the genre may be willing to overlook the story’s impediments for these rewards.