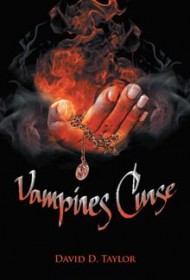 David D. Taylor’s Vampires Curse is a fusion of urban fantasy and crime fiction revolving around Thomas Garrett, a man who has just found out that his beloved girlfriend has been murdered by what appears to be a vampire-obsessed serial killer; her body is drained of blood and there are two puncture wounds on her neck.

Because of a recent argument between the couple, Garrett becomes the prime suspect and vows to track down the real killer no matter the cost. But Garrett’s quest for vengeance is complicated because he really is a vampire — and his search for the killer forces him to revisit a past filled with grievous mistakes and more than a little shame.

The premise has definite appeal, particularly in today’s market, but the novel has a decidedly unfinished feel to it. The grammatical mistakes portended by the missing apostrophe in the title are so frequent — literally hundreds of them — that they all but destroy any narrative momentum. Grammatical errors notwithstanding, the setting is nebulous (readers never get a sense of where they are), the character development is essentially nonexistent, and nothing new is brought to the vampire mythos.

As such, the book will find it hard to see the light of day when there is so much wildly innovative vampire fiction being released (novels like Justin Cronin’s The Passage; Michael Rowe’s Enter, Night; and Mel Nicolai’s self-published The Shake).

With the potential to be a gritty novel comparable to Charlie Huston’s Joe Pitt saga (Already Dead, et. al.), Vampires Curse is instead a cautionary tale for self-published writers – an example of just how monumentally important good proofreading and editing is to the success of a novel.