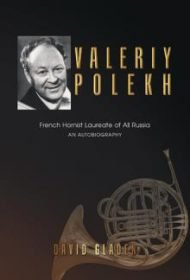 Valeriy Polekh’s self-titled memoir recalls his Russian childhood and musical training, as well as those who influenced him as a teacher, conductor or performer. The book’s first part is devoted to the former, the second part on highlights of his long career, each chapter focused on an eminent musician who impacted his life.

Polekh was born in Moscow in 1918 to a musical home. While neither parent performed professionally, his mother sang to him and his older brother and shared her love of the arts. His father sang and played the balalaika, a Russian stringed instrument. Polekh learned the balalaika at age 6 and later the French horn. He performed in amateur ensembles and youth orchestras, beginning his professional training in 1933. Later, he played in orchestras and military bands during the war and won acclaim in international festivals and competitions. In 1955, he began teaching at a conservatory.

Polekh’s passion for classical music and opera shines through his narrative, and his writing can be lively, as when he recalls dressing as the Count from The Barber of Seville to commemorate the birthday of a harpist friend.

Unfortunately, the level of detail will be daunting for general readers. His narrative is chock-full of soloists, singers, conductors and composers he worked with and the pieces he played, many of which will be unfamiliar to average readers. These specifics become tedious, as do discussions of finer musical points, as when Polekh and composer/conductor Reinhold Gliere discuss the French horn’s part in a concerto: ”Such lightness, and the cantilena is completely different—somehow airy and without any pressure.”

Fellow musicians or musical devotees willing to overlook such flaws may find rewards here. But general readers are likely to find Polekh’s memoir too “insider” to enjoy,