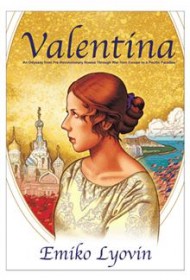 This compelling biography tells the amazing true story of Valentina Lyovin and her journey from Russia after the Revolution, as well as her eventual immigration to America.

Born in St. Petersburg in 1902, the daughter of a Russian Orthodox priest, Valentina lives a fairly quiet existence, interrupted only by a cholera epidemic, until the coming of the Bolsheviks. In the chaos of the civil war that follows the death of the Tsar and the royal family, Valentina and her family somehow manage to survive and stay together, even briefly hosting a commissar in the Red Army.

Eventually realizing the Communists will conquer Russia, the family makes its way to Macedonia. They then move to Dalmatia before settling in Slovenia and Montenegro. After watching her first husband die from cholera, Valentina soon falls in love with another Russian refuge. Not as well-educated as Valentina, the only job he can find is as a logger, forcing him to spend weeks at a time away. Valentina learns the languages in the region and gets a job as a teacher, while enduring frequent separation from her husband. Tiring of this existence, she, her husband and their young son briefly immigrate to Canada before finding a true home in America.

The author, a Japanese woman who married Valentina’s son and spent much time with her, recounts this incredible history that reads like a novel, full of dangers, harrowing escapes, and family dramas. During a search of their quarters by the Communists, for example, Valentina desperately tries to hide her brother-in-law’s incriminating letters, which if found would threaten both the resistance and her family; she succeeds, but only through every bit of her cunning.

Although the beginning, discussing Valentina’s family, has many unusual Russian names that can be confusing, the book also contains a useful family tree. Anyone interested in Russian history before and during the Revolution will want to learn about this incredibly strong, intelligent woman.