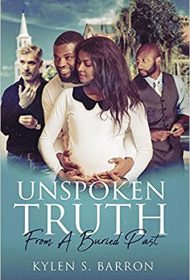 In author Kylen S. Barron’s searing story, her mother’s long-hidden deception plays out in the decades to come through the escalating rage and violence she exacted upon Barron and her siblings.

The memoir opens with her mother’s death from cancer and the author’s shattering grief, despite her mother’s devastating abuse. The reaction is a psychological phenomenon where victims mourn a relationship they wish they had had instead of its reality. “I used to feel like I was parched, and although the water was in front of me, I was never allowed to drink it,” she writes, “This thirst of mine was for my mother’s love.”

By happenstance, a few years after her mother’s death, she learns through social media she has a half-brother, given away 60 years before in a secret adoption in 1957.

The story’s heart is the slowly unraveling truth about her mother, raised in the Jim Crow South, whose rebellious ambition was stymied by race and gender even after she fled North. As revelations unfold, an unresolved mystery remains: What triggered her mother’s inexplicable cruelty, one that destroyed two marriages and terrorized her children? And was the choice she made to give away her son the cause or a symptom?

Barron has an amazing story to tell, with its can’t-look-away brutality and the mounting toll from a secret her mother took to her grave. After learning of her half-brother’s existence, she launches a quest to complete the puzzle.

However dramatic, though, the memoir isn’t perfect. The narrative feels too much like a recitation of facts and conversations without artful crafting to elevate it. It also lacks context of the era’s societal realities that allowed so many to simply ignore what was happening. Additionally, more introspection about Barron’s feelings at each point would have been helpful. How did she come to forgiveness?

Readers will want more about Barron’s process of soul searching as the story unwinds. That aside, this is a raw and painful work that deserves consideration.