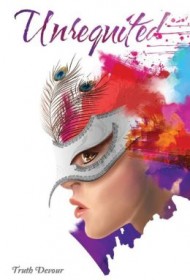 The novel begins five and a half years after the events of Wantin. Talia, who is almost 30 now, breaks up with a longtime lover and heads out into the world again to rediscover herself. An extraordinarily wealthy woman, Talia decides to “do something to give back to the world,” so she founds a non-profit charity to give Third World countries access to clean water. Solution Manifestation is a success—but with that success comes its trappings. Talia experiences firsthand what greed, jealousy, and fear do to those around her.

It’s exceedingly difficult to make a middle book in a trilogy stand on its own; they’re called “bridge” books for a reason (bridging the newness and excitement of the first book with the climactic fireworks of the last). Unrequited is most definitely a bridge book. While the events that transpire in this novel are significant and bring Talia to the point where she is much more aware of the world and herself as a woman, the novel in and of itself isn’t particularly satisfying. The bombshell revelation at the very end is intriguing—but it doesn’t make up for the rest of the storyline, which is essentially the author setting the stage for the final installment of Talia’s journey.

Readers who enjoyed Talia’s amorous adventures in the first novel are likely to be disappointed with the direction that this volume takes — while remaining hopeful that the final installment returns to form.