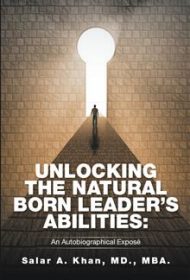 In Unlocking the Natural Born Leader’s Ability: An Autobiographical Exposé, Dr. Salar A. Khan shares wisdom he has gleaned through decades of experience as an internist and pulmonologist in three different countries: Pakistan, Saudi Arabia and the U.S. Throughout, he weaves together autobiographical elements that illuminate how he became a leader with guidance on how readers can develop their own innate leadership abilities.

Khan divides leadership abilities into two categories: convergent thinking and divergent thinking. “Convergent-thinking leaders,” he writes, “have a limited predetermined number of options and will look for data that supports one or the other.” Because of this, they miss choices that could, in fact, be superior to those being considered. Divergent thinkers have a greater capacity, notes Khan, to “deal with stressful situations honestly, confidently, and intuitively and are creative, knowledgeable, charismatic and sociable.”

Khan stresses the importance of developing your intuition, insightfulness and self-confidence and includes the following as key leadership characteristics: integrity, the ability to communicate effectively, sacrifice, patience and composure, open-mindedness, courage, compassion, and optimism. He believes that the pursuit of internal happiness is better than the pursuit of money. Although the advice offered is not necessarily groundbreaking or particularly comprehensive.

Khan writes in an engaging style, and anecdotes of his own journey prove compelling. He reveals how six of the 11 children in his birth family died between the ages of two and four because of “global health issues.” Stories of his upbringing in Pakistan, meanwhile, show intriguing ways that supportive parents can positively shape their children’s future. Khan also shares detailed anecdotes from his medical work that illustrate how he developed his own natural born leadership tendencies.

If you’re looking for a detailed blueprint on developing leadership traits, this is probably not the book for you. If, however, you are interested in spending time with a caring mentor who has lived what he shares, then this is a worthwhile addition to your library.