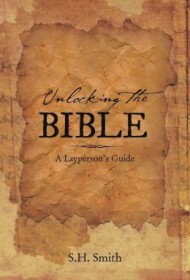 In Unlocking the Bible, scholar S.H. Smith presents a simple premise: The Bible, though divinely inspired, was not written in a vacuum. Instead, it was written during human history, over the course of several centuries in different parts of the world with different authors, each with a unique objective in relating the events in what we’ve come to know as the Old and New Testaments.

The Bible therefore, Smith argues, was never meant to be read fundamentally in the way some extremists read it today. There are ways of understanding the Bible in a mature, thoughtful fashion, Smith argues. His book provides a tool to help others read scripture “with a more critical eye… in order that the reading experience might be enriched, for the more perceptive the reader is, the deeper the truths that will be uncovered and the greater will be the reader’s reward.”

In this, the author is successful. Although sometimes dense, Unlocking the Bible is well-written and well-argued. Smith is an astute observer with a commanding understanding of Judeo-Christian history, Greek and Hebrew language, and sacred scripture. Among the many interesting chapters here, some of the most compelling material concerns prophecy and myth. The author clearly dispels popular and superficial understandings of both topics. Highlighting how prophecy is more about present events than future happenings (as well as explaining how New Testaments writers saw Old Testament writings as potentially prophetic in explaining the arrival of Jesus on the world scene), Smith also argues that referring to the Bible as myth is not derogatory, but a way of acknowledging the depth of the truth behind the stories.

Unlocking the Bible clocks in at nearly 500 pages. This is a daunting commitment for most readers. But those willing to take the ride with Smith will leave feeling educated and intellectually challenged.