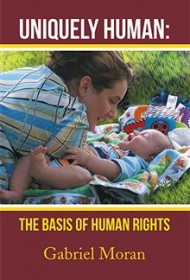 This fascinating and important book explores human rights—rightly described by the author as one of the most misunderstood terms in modern politics–as a part of the language of modern international relations. In so doing, the author separates human rights from natural rights, arguing that ius naturale has been used as an incorrect synonym for the broader, more accurate term of “human rights.”

Author Gabriel Moran is one of the nation’s leading published experts on the subjects of religion and ethics. He notes that the term “natural rights” —rights given to humans by nature — was deeply embedded in the political traditions of the 19th century Enlightenment, particularly as part of the philosophical underpinning of the American and French revolutions. Even then, he contends that philosophers were confused and contradictory in their use of the term. Thus, once 20th century events superseded that Enlightenment tradition, the concept gave way to the more inclusive “human rights,” a term Moran defends as more in tune with the sweeping international challenges of the post-WW II period.

His book is part history (the first section, an absolute tour de force, deals with the history of natural law since its appearance in early Christian theology); part rhetorical contextualization (as he argues that human tradition is the basis for human rights); and part advocacy (as he dismisses the Universal Declaration of Human Rights as passed by the United Nations, calls for a stronger application of human rights for homosexuals and the elderly, and more).

This is not a book for general readers. Without being high-flown or boring, Moran’s tone is academic and assumes a certain amount of fundamental knowledge in the field. Yet the clarity of Moran’s arguments and the passion with which he advocates them will keep informed readers engaged from start to finish. The depth of his research cannot be challenged. This book should be adopted as a necessary addition to courses on international law and ethics.