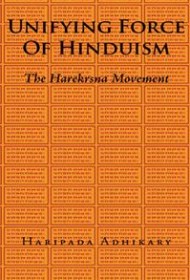 In Unifying Force of Hinduism, Dr. Haripada Adhikary, who has studied Hinduism for over 40 years, presents the history and contributions of the Harekrsna (Hare Krishna) movement.

Adhikary traces the history of the Hindu religion back to its early years in India and to its most ancient writings in the form of the Rigveda, a collection of sacred Hindu hymns, poems and prayers dating to about 1500-1200 B.C. Sri-Caitanya, a devotee of the Hindu deity Kirshna, laid the foundation for the movement, with its infusion of reform into Indian life and religion. Caitanya was so influential that some followers worship him as an incarnation of Krishna.

After a brief historical overview, Adhikary focuses on the country’s much-criticized traditional caste system, which has rigidly divided society into various social orders. Caitanya “denounced the caste system” and “invited and received people from any caste to participate” in the Harekrsna movement.

Adhikary proceeds to discuss the expanding influence of Harekrsna. Among many notables influenced by the movement, the most prominent was Mahatma Gandhi. Adhikary argues that Harekrsna has restored “the confidence and stability within the Hindu community,” brought back many who had left for Buddhism, and helped in the ongoing struggle to break down the caste system. An appendix lists centers throughout the world for the International Society of Krishna Consciousness.

The book illustrates in an easy-to-follow manner the development and contributions of the Harekrsna movement. Well-researched, it includes numerous footnotes and a bibliography (though the citings lack publishers, cities, and occasionally dates). Unfortunately, the effort is marred by numerous grammatical flaws. The book’s opening sentence is typical: “Hindu religion is one of the oldest religion [sic] of the world started from the pre-historical era . . .” Missing articles, singulars instead of plurals, and other mechanical issues tarnish an otherwise fine presentation. Perhaps before a second printing, the author might seek some editorial assistance.