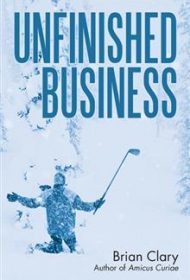 The first few chapters of this novel are bound to resonate with fans of the popular golf movie, Caddy Shack. It’s hard to forget Bishop Pickering shooting the round of his life in a raging storm. But perhaps 74-year-old protagonist Ben Digby goes him one better as he’s forced to quit one hole short of shooting his age while a Montana blizzard bears down, ripping the limbs from trees next to the 18th tee. Word gets out about the Vietnam War veteran’s unfinished feat, and before long he becomes a celebrity, even appearing on Good Morning America.

At this point, the CEO of Pitz-Smart big box stores (Walmart clones) decides to capitalize on Ben’s fame by pressuring him to finish the round in the spring, with the local store’s backing. Ben, who blames Pitz-Smart for the demise of his own hardware store, is tired of the limelight and wants nothing to do with the plan. However, he’s persuaded by Pitz-Smart’s offer of a significant contribution to the local VFW, which is desperate for money to fix its dilapidated building.

What follows is more about the effects big business on a small town and the Pitz-Smart executives lack of respect for the community’s traditions than about the game of golf. Although the conclusion might be somewhat predictable, the author’s deft characterizations make readers feel like the audience of a melodrama as they alternatingly root for Ben and his VFW pals; Mungo, the town wit as he verbally takes on the CEO; and Cookie, a war hero who humbly runs the golf course restaurant but doesn’t back down from the Pitz-Smart big shots.

Golfers and general readers alike will be caught up in the excitement, and anyone who likes to see the underdog come out on top will find Unfinished Business an enjoyable and satisfying read.