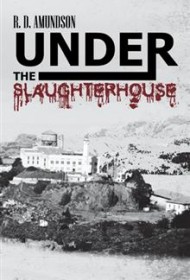 Nearly 200 years ago, Samuel Taylor Coleridge suggested that one of the most important elements in a fantastic story is the “suspension of disbelief.” A common technique used by authors to achieve this (and the one used here by R.D. Amundson) is by removing the narrator from the action. In this case, naturalist photographer Joseph James is saved from a grizzly bear by an old recluse named Truman Struck. In turn, Struck asks James to relate his amazing tale. And James tells it to us.

Struck, serving a sentence in Montana for a minor offense, works as an assistant to the prison teacher and librarian, Laura Whitherby. Though he is significantly older, he has feelings for Laura. Eventually, he learns that he and Laura share ominous dreams about the old slaughterhouse on the prison grounds. The two learn that they are tied together by happenings 13 generations ago and that they must join forces to battle an ancient evil that is trapped beneath the slaughterhouse.

Amundson shines in his descriptions of the more mundane horrors that lead up to the confrontation. His depiction of the serial cannibal murderer, Ichabod Cain, who once occupied the basement of the slaughterhouse, will bring chills and shudders to any reader. However, when the author delves into the supernatural, it becomes more difficult to suspend that disbelief. Truman seems to have it far too easy, battling a hellhound into submission with karate kicks in one scene and later outwitting the devil himself.

Another problem is that the narrative frequently switches points of view. If Truman is telling the story to James, the whole story should be in first person, yet the narration suddenly becomes third person omniscient at times, revealing information there is no way Truman would have known.

Despite these faults, Under the Slaughterhouse has a compelling quality that will keep readers turning the pages and rooting for this unlikely pair of protagonists against almost insurmountable odds.