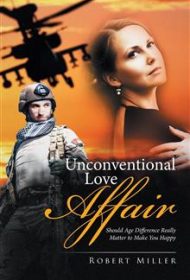 This novel centers on a budding romance between a newly divorced, middle-aged mother and a young soldier fresh back from combat duty in Iraq.

Brad Wilson, 25, and Linda Wallace, 37, meet at Cal State University where they work on a class project together. Their friendship soon turns romantic, but because of their age difference, it meets with disapproval. Linda’s daughter, Diane, now in college herself, demands her mother end the relationship, and her ex-husband and parents also disapprove. Meanwhile, Linda’s college professor seems intent on getting to know his student beyond the classroom.

To compound matters, Brad is required to eventually return to active duty for at least four years, putting him in danger, but also underscoring the disparity in their incomes. Thanks to her former marriage, Linda is wealthy and receives a large amount of alimony.

Age disparity in a relationship can make for a compelling narrative. But unfortunately, the book suffers from a number of issues. The plot is weighted with mundane detail—such as when a minor character shares information about everything from his hernia operation to a long-ago visit to his school sweetheart’s house—all of which do little to further the plot and quickly grow tedious. The text includes jarring tense shifts from past to present, and the point of view, which is generally limited-omniscient from Brad or Linda’s perspective, sometimes broadens to omniscient.

Many of the characters seem stereotypical: Linda, the beautiful and good, but wronged wife; Larry, the jerk of an ex-husband and his new wife, and so on. And finally there are innumerable editing errors, including missing and misused words (“complement” vs. “compliment”) and the repeated use of “then” (“The girls then joked … The girls then went…”)

Unconventional Love Affair would benefit from significant tightening and a professional editor. As it stands, the story is most likely to appeal to patient readers with an interest in May-December relationships.
Also available in hardcover and ebook.