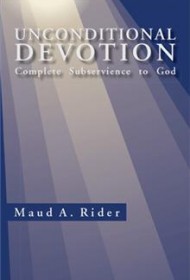 “The older I get and the more time I spend among believers,” Maud Rider writes, “the more I realize that the majority of them are having very serious problems believing and accepting the Word of God as the Bible declares it to be.” This statement in Unconditional Devotion is the crux of the author’s nearly 600-page work. In it, Rider looks to offer a balm to those struggling with their faith, by illuminating scripture while stressing the importance of leading a God-centered life.

In a series of long, stream of consciousness-like essays with titles such as “Betrayal of Truth,” “Mercy before Destruction” and “Satan Hates You,” Rider examines the character and choices of such biblical protagonists as Paul, Adam, Cain, and Samuel and discusses how each responded to God’s call. Along the way, she unpacks scriptural passages, ultimately returning to a theme that weaves itself throughout the book: “Stop worrying and fretting and take God at his Word. For a faith that trusts God is a satisfied faith.”

Unconditional Devotion is prophetic in tone and Rider’s desire to help others turn their focus toward God is commendable. Further, she demonstrates vulnerability in her text, unafraid to acknowledge her own brokenness. Early in the book, she relates a poignant story of how someone’s hurtful words silenced her singing voice for years. Eventually, her study of the Bible renewed her faith and strength.

Rider has a prodigious grasp of scripture, but there are a number of problems with the text, including wrong verb tenses (e.g. “it did not took him long”) and incomplete sentences (e.g. “As we walk home from the concert in a group of six people”). Moreover, in her enthusiasm for her subject matter, Rider sometimes loses her focus, making reading challenging at times.

In sum, Unconditional Devotion should be praised for its spirit, but it still requires editorial work before it can attract a wide audience.