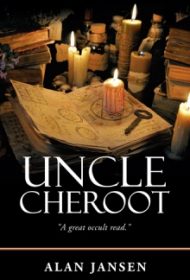 The novel is set in England’s Cotswolds and narrated by Turtle Southton, a woman in her 70s. She begins the story when she, as a young teenager, first meets “Uncle” Cheroot. The narration toggles between Turtle’s youth and the present and includes accounts from Cheroot’s disturbing diaries.

Although the Southton family calls him Uncle Cheroot, he’s neither a relative nor human. Changed into an immortal long ago, Cheroot visits the family farm periodically to have sex with Turtle’s married mother, Julia, hoping to mix their blood and make her immortal. When he discovers this isn’t possible, he leaves for good, finding it too painful to watch Julia age while he remains young. As the story unfolds, we learn of Cheroot’s impact on Turtle and of her quest to find him after her mother dies.

The book offers an imaginative world with well-developed characters that include an anthropomorphic dog and turkey. The author injects humor into the story, as well. For example, during a haunting of the local church, a “ghost” prefers to embarrass people rather than harm them physically: “Verity Hayward, sitting in the very first pew, had her very elegant and expensive skirt yanked off completely from her body, revealing her superb buttocks, contained within a very tight-fitting knicker that left nothing to the imagination.”

Unfortunately, the book also contains several flaws. Lines are double-spaced, creating an unpolished presentation. Information (Cheroot’s lack of conscience regarding sex; Julia’s eventual career as a famous still-life painter, etc.) is repeated, sometimes as many as five times.  Readers will find typographical errors and an awkward shift in narration when a vampire delivers a first-person account of meeting Cheroot.

Those who can overlook such issues, however, will find many rewards. Uncle Cheroot delivers interesting characters in a unique, surprising fantasy plot.