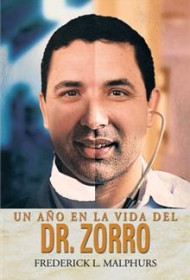 Un año en la vida del Dr. Zorro is an action-heavy novel based on the true experiences of one family’s battle against drugs cartels in Mexico.

The eponymous character is Dr. Eduardo de la Vega, said to be descended from the legendary Zorro himself. This heritage is reflected by the doctor’s aptitude with a rapier, ability to single-handedly fight off hordes of henchmen, and his mission to defend the people of his land against their biggest threat: drug cartels. Other family members and employees of the wealthy de la Vega family are also brought in to help disrupt and overthrow the powerful Sinaloa Cartel.

This novel is based on the dark reality of modern day Mexico’s war against drug cartels. Since few of the perpetrators of these narco-crimes have been brought to justice in real life, and because of these very real threats, author Frederick Malphurs heavily disguises the identities of his story’s subjects.

Malphurs’ story delivers meticulous plotting and is at its most successful when the author sticks to the action, creating a number of tense and gripping sequences. He occasionally allows himself to get bogged down in details, however, and the novel could be slimmed down considerably if this extraneous material were trimmed (not every meal or item of clothing needs to be described in explicit detail). In addition, the romance subplot feels shoehorned in and clichéd, and highlights the generally short shrift given to the female characters.

Although the language can occasionally be awkward and exposition-heavy, Malphurs paints a compelling portrait of daily life in a world controlled by organized crime. This translation from the original English might at times veer into the over-literal, but such moments are rare, and in general the translation appears to be skilfully handled.

Overall, this is an engaging read for thriller lovers and those interested in the reality of a city in the grip of drug cartels.