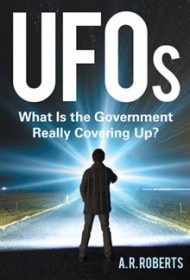 UFOs is A.R. Roberts’ second book concerning his hypotheses on UFO phenomena. In the nearly 500-page From Adam to Omega (2014), Roberts discussed dozens of previously reported abduction stories and a myriad of other sightings and reports, including his own experience as a boy, in addition to his broader thoughts on the subject.

In this current, less-hefty volume, Roberts concentrates on the alleged government cover-ups of the 1947 Roswell incident and other possible interactions with aliens. As in the first book, the author emphasizes the possibility of alien visitations as explanations for most of the miraculous incidents in the Bible.

Roberts posits that the history of humanity has been influenced by a plan by extra-terrestrial beings to prevent planet-wide extinction. He believes that most technological advances—from ancient times to the Renaissance to the Industrial Revolution to the present high-tech generation—have been orchestrated by human/alien hybrids. He includes luminaries such as Moses, Jesus, Leonardo da Vinci, Galileo, Thomas Edison, Henry Ford and Werner Von Braun (among many others) in this category.

The main reason for government cover-ups, Roberts surmises, is that revealing the truth would unsettle a world dependent on religious beliefs. Therefore, the public will be made aware of this only gradually, possibly over centuries.

The narrative is somewhat repetitive, and the author whets readers’ appetites early in the book with three pages of pictures of famous paintings that appear to show UFOs. Disappointingly, there are no other illustrations, although he reports numerous cases of photographic evidence after this.

Nonetheless, those intrigued by the possibility that we are not alone in the universe will find UFOs a fine addition to the genre. The book is extremely well researched with 40 pages of bibliography, endnotes and index. And despite Roberts’ continual warnings that readers need to make up their own minds from the “evidence” he has presented, many of his arguments are thought provoking indeed.