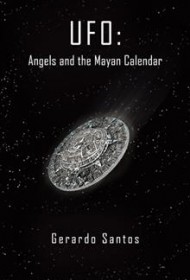 In his UFO: Angels and the Mayan Calendar, Gerardo Santos mixes the mythologies of Egypt, Greece, Mesopotamia and others with quotations from the Old Testament and the Book of Revelation plus interpretations of the Mayan calendar to come up with hypotheses concerning the creation of the human race, UFO phenomena and the end of life on Earth.

Santos posits, among many other things, that 17 planets orbit our sun, each of which takes turns occupying the coveted third position in which life may thrive. Thus, ancestors of the human race actually came from Pluto and other currently far-away planets. In addition, the author discusses the 15 dimensions in which he thinks various spiritual life forms exist. Beyond those already recognized – length, width and height – he doesn’t explain exactly what the other 12 dimensions entail. The fallen angels exist in one of these dimensions.

The first half of the book details Santos’ theories on the creation of the human race by these angels. Not much mention is given to UFOs or the Mayan calendar until the second half, where Santos notes that the Mayan calendar predicts the next age of Earth. This will not begin in December of this year, as others believe, but in 2021. Somehow, he notes, the last two numbers were transposed. In 2040, Earth will start moving toward the fourth position, while planet Nibiru replaces Mercury and each planet moves outward. He expects all life on Earth to end in the year 2540.

While these and his multitude of other theories might have been intriguing to readers interested in the topic, Santos’ book is not easy reading. The book lacks focus and the context necessary to understand his concepts, and many of his conjectures are extremely difficult to comprehend due to his use of unexplained jargon. The technical charts and graphs only serve to exacerbate the problem.

Ultimately, those looking for an answer to the UFO enigma or the mysteries of the Mayan calendar will be frustrated in their quest to find them here.