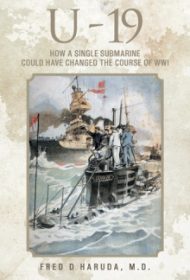 In his alternative history novel U-19, author Fred Haruda explores, in the words of his subtitle, “how a single submarine could have changed the course of WWI.”

Haruda opens the story with a vignette featuring broad German stereotypes (page one features two Germans named Hans and Fritz, one of whom complains about wartime shortages meaning “no lemon for my weinerschnitzel!”), then jumps right into the German High Seas Fleet tracing a path toward the Danish coast, essentially setting up the chessboard for war. Gunther (sometimes called “Gunter”) Rolfe is the skipper of a German U-boat, who identifies and sinks enemy ships. As the war continues, he records his cruises and kills.

The story is supposedly about the potential for this U-boat to play a critical role in the Battle of Jutland, leading to a very different world at the end of the war than what happened in reality. But sadly, deciphering the page-to-page plot twists is itself a battle, as the narrative is overwhelmed by typographical errors, inconsistencies, and dropped punctuation. “U-boat” is alternately spelled with an en-dash, an em-dash, and a blank space, sometimes all on the same page. “Its,” and “it’s” are consistently misused (the text also includes “its’,” which is always incorrect. Locations are misspelled (e.g., the “Carebean”). The story’s second-to-last paragraph alone contains six spelling errors, each of which stops the story cold while readers scramble to understand Haruda’s intent.

There’s no character development; most of the book is taken up with how the reimagined battles play out and recounting the territories that are lost and gained.

Haruda has a juicy idea here, and a character-driven story isn’t really a prerequisite when wartime strategy is your passion. But readers can’t be expected to navigate through such a daunting ocean of technical mistakes. Revised with extensive editing and proofreading, U-19 might be a winner, but as is, it’s hard to tell.