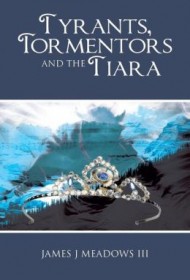 In James J. Meadows’ fast-paced fantasy novel, Tyrants, Tormentors and the Tiara, four evil sorcerers form an uneasy alliance in order to destroy their mutual enemy until unexpected events turn their attention to a greater cause.

Each of the four sorcerers had once been a malignant ruler of a nation, and each of the four had tried to destroy at least one of the other three. Queen Sylvia, with the help of an enchanted tiara, had put a stop to their warring and exiled each of them from their countries.

Having learned that Queen Sylvia has been snatched by a powerful demon, the magicians, still driven by a desire for personal revenge, travel across country in order to rescue the queen and then kill her. As they journey, they find themselves warming toward each other, and they even perform some good deeds. Although they are far from good, they are becoming better.

The sorcerers are puzzled by the changes within themselves, and the reader is never quite sure whether their gradual transformation is brought about by their experience of suffering when in exile, the example of others, or some larger, transformative good. The author nonetheless manages to make the character changes seem organic: By the time they rescue the queen, the sorcerers’ goal has changed from one of petty vengeance to the heroes’ task of overcoming the demon who would enslave humanity.

Meadows does many things well in this novel. He deftly juggles multiple plot strands and creates tough, wisecracking, antiheroes who readers will find strangely sympathetic. His battle descriptions are vivid, and the world he depicts is engaging. His book is somewhat marred by typos and tense agreement problems, but these errors are not so great as to detract from an otherwise enjoyable read. Fantasy fans should find Tyrants, Tormentors and the Tiara a welcome addition to their reading list.