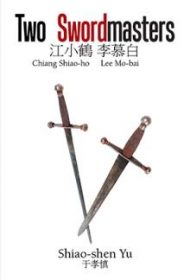 The second story illustrates a complicated relationship between Lee Mo-bai, Yu Ceo-lian, and her betrothed, Mon Zhi-an. Once again, miles are travelled and years pass, and the lives of the characters become more intertwined.  Lee Mo-bai struggles with his feeling and connection to Yu Ceo-lian, his loyalty to her fiancé, and his feelings towards Violet, a prostitute. Unfortunately, every character is destined to suffer at the hands of the others.

Told with little emotion, rather a recounting of events, Two Swordmasters expands the histories of these familiar characters and successfully explores themes of revenge and the Chinese concept of the “living widow.” The character’s relationships and histories become overly complicated, however, due to numerous secondary characters. Additionally, the story often moves too quickly and the timeline can be difficult to follow. Still, the narratives are grounded by the trajectory of the main characters, and exciting combat, adventure, and life lessons abound.

Two Swordmasters isn’t likely to appeal to general readers, but fans of Crouching Tiger, Hidden Dragon will appreciate this deeper look at familiar characters. The stories also offer rewards for those interested in Chinese history and culture.