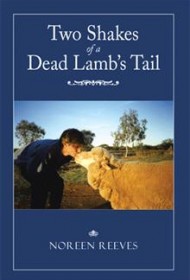 Two Shakes of a Dead Lamb’s Tail is a bittersweet memoir of a young Australian woman’s journey to self-sufficiency and adventure, earned through overcoming tough challenges as a young wife, mother, farmer and pastoralist.

Two Shakes opens with author Noreen Reeves pregnant with her second child as she and her husband relocate from Australia to teach in a remote region of Papua New Guinea. Three years later, they return to eastern Australia, now a family of five, and begin a farm that grows as they acquire new skills, daring, land, and animals. Ultimately, the family relocates to the remote western Australian bush, where they become large-scale pastoralists. The memoir takes us to the time the children reach adulthood. Each context tests Reeves’ stamina, family, marriage, and sense of self.

When Reeves writes with straight, active details—usually about the beauty of the land or the animals’ personalities—the story flows artfully. But too often she falls into offering an inventory of seemingly random events, more like journal entries than a memoir. When this happens, the narrative feels directionless. A stronger commitment to the early theme of a young woman learning the tough stuff she’s made of would remedy this.

Moreover, Reeves’ human characters—including herself—too often hover at the periphery. What gave her such passion to become a farmer? We have hints that her mother and grandmother told stories of growing up on a farm, but Reeves includes no girlhood memories. Likewise, we know nothing about how she met her husband and why they decided to marry.

This is an interesting memoir about a woman finding strength through life’s trials. Yet as it stands, it seems written more as a memento for family and friends than for a wider audience. One hopes Reeves will persevere, for when her prose sparks a visceral experience, such as when she suddenly sees the beauty of the landscape in the midst of her troubles, it sings.