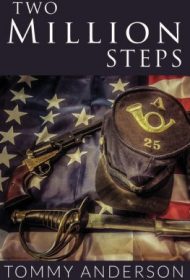 In Two Million Steps, Tommy Anderson uses his great-great-grandfather as a focal point for a fictionalized story that documents the 25th Wisconsin Volunteer Infantry Regiment’s exploits in the American Civil War.

The novel is thorough in its coverage of the regiment’s role in the war. Established in 1862, in La Crosse, Wisconsin, the regiment was first sent to Minnesota to fight the Sioux Uprising. The men later received orders to move to Camp Randall in Madison, Wisconsin. During the war, the regiment took part in significant campaigns, including the Siege of Vicksburg, battles of Resaca, Meridian, Kennesaw Mountain, Atlanta, Savannah and campaigns against the Carolinas. It was mustered out of the Union Army in 1865.

The experiences of the story’s protagonist Hamon and his friend Al highlight the effects of these battles on soldiers and their families. Hamon longs to return home to his wife and son. He expresses guilt in a letter to his wife for destroying homes and farms and celebrating his regiment’s victories. As the war rages on, he becomes more desensitized to the violence and brutality around him.

Readers will find some striking descriptions of the soldiers’ incapacitation and death from measles, malaria, and consumption, their feelings of isolation and mental anguish, and bloody skirmishes, as in: “As the smoke cleared, it revealed broken and bloody men with numerous severed limbs…. His group of men looked like small, broken toy soldiers from the observation at the Confederate mountaintop.” Unfortunately, such moments are too few and much of the story consists of exposition about troop movements and historical background information. Additionally, while Hamon’s character has a backstory and some depth, Al and the other men in the regiment —referred to only as “the men”—are portrayed superficially.

These flaws prevent the story from being fully immersive. Nonetheless, for those interested in the American Civil War, the book offers valuable insight into the experiences of the 25th Wisconsin Volunteer Infantry Regiment.