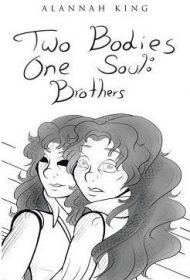 Alannah King’s novel Two Bodies One Soul delivers a fantastical tale of twin vampires who are challenged and imperiled by their own comrades.

The conflict begins when Maverick Coven, a group of vampires, considers the formal induction of the twins Lukas and Tristen. Threatened by their inclusion, Maverick member Maliki hatches a plot to bar the pair from the undead “family.” This sets the stage for Lukas and Tristen to struggle with identity and belonging issues, and raises questions about the pair’s role in the wider world of the undead as secrets are revealed about their past.

These characters are richly imagined. The twin vampires boast their own distinct motivations and struggles, and their separate character development is a highlight. What’s more, Maliki doesn’t fall into stereotypical narrative vampire mold. Jak and Jaquelin, leaders of the coven, are similarly refreshing. With her careful attention to detail and precise touches that even include hand-rendered illustrations, the author successfully summons personages that are believable, compelling and distinct.

That said, the book’s plot structure is a bit rambling. The action feels disjointed at points, such as a key scene focused on Tristen’s run-in with a mysterious character that reveals the twins’ real backstory. The flow of this sequence and other key passages becomes dragged down by long, unnecessary stretches of dialogue and exposition.

The story also suffers from glaring grammatical mistakes and editing oversights. A constant stream of “it’s” and “its” confusion, along with basic spelling and grammar flaws, is a consistently distracting flaw. The text is also hampered by a frequent lack of hyphens, commas and other punctuation (i.e., “For all Jak’s straight backed and well brought up appearance he was an unorganized person”).

King displays passion for her imagined cast of heroes and villains and manages to put an interesting spin on a well-trod subject. Unfortunately, the book’s technical and structural problems impede enjoyment, issues that are only partially salvaged by its appealing characters.