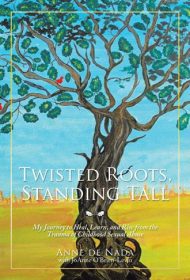 Twisted Roots, Standing Tall is a memoir in which author Anne de Nada details the sexual abuse she suffered from her father—and its ramifications within the family—while growing up in Australia.

The title refers to a magnificent oak the author saw one day while driving. It was held up by an astonishingly knotted root system that was “more than twisted; it was tortured,” she writes. The tree serves as a metaphor for de Nada’s harsh beginnings and ultimate growth into a confident woman, albeit one who never forgot her early wounds.

De Nada’s memoir is ably pieced together from journals, letters, and photos, with the help of a professional writer. She grew up poor, with learning disabilities that hampered her academic studies. Her mother was cold to her and her father repeatedly assaulted her. One night, at age 16, when she refused him a sexual favor, he walked outside and shot himself.

Despite this shock, de Nada moved forward. She earned a college degree and became the owner of a maid franchise, which funded the numerous therapies and trips she compulsively undertook seeking to become whole. In Quebec, she experienced rebirthing in warm water. In Jamaica, she received extensive bodywork from a Rastafarian masseuse. In Bolivia, she attended a ayahuasca ceremony in which a shaman administered the hallucinogenic to her. Metaphysics seemed to offer the most promise: “I felt my third eye represented me in my truest form, totally untouched by trauma or anything else in the outside world.”

Readers will appreciate the author’s candidness, both regarding her father’s sexual abuse and, later, her struggle to land a healthy relationship. That said, most of the book discusses the authors many attempts at healing, which can become wearying. Also, her children and second husband appear to take a back seat to her soul-searching; one would like to see more about their reaction to her many absences.

Nonetheless, de Nada’s story will provide hope to those who have suffered under similar circumstances. It should also appeal to readers interested in psychology and healing methods, both traditional and New Age.