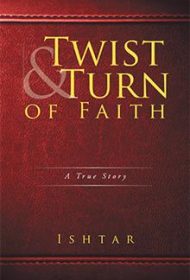 Immigration and emigration are very much in the news these days, but what does it mean to leave your homeland and start over? For the author, moving for love quickly becomes complicated, as she recounts in this memoir.

Ishtar begins a chaste romance with Ashur when she’s a young teen living in Mosul, Iraq. He moves to Greece to avoid conscription into the army and she follows soon after, intent on marrying him. Unable to move to America and unable to work in Greece since they’re not in the country legally, they make a new life in Australia with the help of local Assyrian Iraqis. As they settle in with their new child, it’s revealed that Ashur is a serial philanderer, and Ishtar ultimately divorces.

This story is full of the twists and turns advertised in the title, but Ishtar also claims to be a medium and includes stories of visions she had throughout her life, sometimes when she was too young to interpret them. In dreams, she receives advice from Jesus, which generally centers on getting out of an abusive or dangerous situation, but she is also given moving counsel when her father dies. These are interesting stories, but frankly so is the tale of a single mother who has left her old life behind to make her way in a new country. Dividing her time between both leaves readers hungry for more of one or the other.

Twist & Turn of Faith is a timely look at the reasons people emigrate (Ishtar also helps her mother and sisters move to Australia when Iraq becomes too dangerous for them to remain). Some readers will like the added excitement that the author’s psychic abilities add, but the book’s strengths are in the day-to-day reality it describes. Despite the need for further development, the book offers a largely interesting journey for readers.