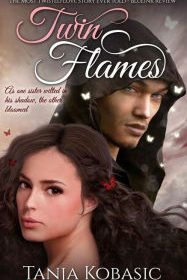 The second installment of Tanja Kobasic’s Untapped series—and sequel to Vanishing Twin—continues the strange but mesmerizing story of conjoined twins Scarlett and Jade Jennings, who are fused at the pelvis and have become pop culture celebrities after writing a phenomenally successful inspirational autobiography.

Living in Las Vegas, Scarlett is involved in a passionate relationship with world-class illusionist Sebastian Cole—but their love affair is obviously complicated by the existence of Jade, who is becoming increasingly jealous and downright malevolent to her polycephalic sister and her boyfriend.

Essentially a paranormal fantasy with generous helpings of romance and dark fantasy undertones, the storyline in this second novel explodes—both in action and thematic scope. Sebastian—who possesses the world-changing powers of a reincarnated Nephilim—is being manipulated by members of a Luciferian cult to join their circle and effectively recreate the world. Part of that manipulation includes the threat of a looming natural disaster, which could kill thousands and resurrect a rogue angel.

Scarlett and Jade—once loving siblings— are now involved in their own battle. Scarlett wants nothing more than to have a “normal” relationship with Sebastian, but Jade’s mere existence makes it impossible—especially when Jade may well be in communication with the spirit of Sebastian’s dead twin, an incredibly dangerous entity seeking passage back into the physical realm.

Powered by unforgettable characters and an impressively multi-tapestried storyline, Kobasic’s saga is wildly ambitious, featuring an epic war between God and his alter ago, reincarnation, prophecy, apocalypse, and, above all, a profoundly powerful spiritual motif. While the storyline becomes a bit unwieldy at times, Kobasic does a skilled job overall of keeping things focused and directed.

In a genre where true originality is increasingly hard to find, Kobasic has written a singularly unique paranormal fantasy with singularly unique characters. Grand-scale storytelling with an intimate feel, — this series truly is, as the author notes, “the most twisted love story ever told.” Irresistibly so.