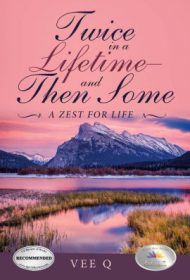 Q notes in the Preface that she wants her survival to serve a greater purpose. “My hope is that through my sharing some of my experiences, a reader or someone out there also battling cancer or a serious illness may find inspiration and see a more favorable light ahead,” she writes.

The book discusses her work, marriages, breast cancer (and its reoccurrence), and other illnesses, but most of it is devoted to post-cancer events. When things don’t go as planned – a missed flight or a storm that forces her to close her booth at an outdoor market – she makes the best of it and forges ahead. That’s one of those lessons she hopes to impart to others.

Unfortunately, there aren’t enough of these lessons. Much of the book consists of mundane reminiscences of trips she has taken, such as: “I ordered my mai tai and brought out some of my manuscript to read. I decided not to have dinner; I wavered about having appetizers but decided to just enjoy my cocktails…” Other chapters are often difficult to connect to her goal of inspiring cancer patients (notably extended passages on New York City parking regulations and her run-in with police for making an illegal turn).

There are also some factual errors: Nashville’s entertainment district is referred to as “Downtown Broadway” (it’s either downtown or Broadway Street); a New Orleans bar is dubbed “Ma’s Hideout” (there’s a venerable restaurant called Mothers and a bar named Hideout, but no Ma’s Hideout), etc.

Two appendices appear at the end: one on Q’s brother’s death, and the other a eulogy for her nephew, delivered by his mother. Both seem at odds with the book’s intended purpose.

Those looking for life lessons will be disappointed by this memoir, which seems more appropriate for the author’s inner circle than a wide audience.