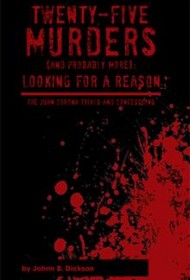 The crime was unspeakably brutal: twenty-five men stabbed, slashed or shot, buried amid the orchards of California’s Central Valley, presumed killed by a 37-year-old Mexican farm labor contractor whose signature was on receipts found among the graves.

The trial of Juan Corona was riddled with legal errors. As John B. Dickson writes in Twenty-Five Murders, his fascinating account of Corona’s two trials, both of which ended in convictions: “One has to remember the time was 1971, the location was a rural county, and experience in this type of case – anywhere – was almost nonexistent.” The case, based solely on circumstantial evidence, was so badly bungled by both sides that the alleged murderer at its heart became almost an afterthought.

“There was basic investigatory procedure in 1971, but it appears to have been either ignored in this case or unknown by the deputies and their superiors in the field,” writes Dickson, a retired civil lawyer who delved into the archives after a talk by a district attorney ignited his curiosity.

Investigators mixed up victims’ identities and the locations of their graves. They handled much of the evidence before it could be fingerprinted. No competency hearing was held before the first trial, despite Corona’s history of involuntary commitment as a paranoid schizophrenic. The judge didn’t suppress evidence that had been improperly seized or impose sanctions against prosecutors for failing to share it with the defense. The lead defense attorney obtained rights to Corona’s life story, an obvious conflict of interest. The resulting book, Burden of Proof, was one of four written around the time of the trials.

Dickson’s is the fifth, a noteworthy addition to the libraries of armchair forensics experts, true crime aficionados and readers with an interest in American justice. His legal background, exceptional research and compelling writing style make Twenty-Five Murders a riveting, remarkably suspenseful read, all the more impressive given that we already know how it ends.