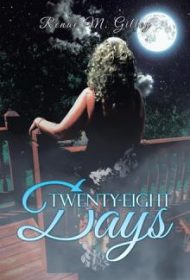 Renäe M. Gilley’s Twenty-Eight Days is a love story between a mature couple brought together by a recurring dream and a chance meeting.

Wealthy, 66-year-old Mike Williams dreams of a beautiful woman whose face he never sees. After Mike receives hypnosis to reveal the woman’s face for him, his housekeeper Katie meets Kara, a woman who looks remarkably like that image. Unfortunately, she’s married, prompting Mike and his team to devise an unusual plan to give Mike and Kara 28 days together and, perhaps, fall in love.

In this plan, Mike pays Kara’s husband a large sum of money to abandon her at the hotel without money, credit card or phone, leaving her no choice but to go home with Mike’s team. Now reliant on this group, Kara takes the initiative and creates a vibrant art gallery business. As the story evolves, her arrival softens the formerly aloof Mike and helps meld the team into a family unit, working together for shared goals.

Gilley’s story is heart-warming but lacks dramatic tension and believability. Mike has boundless wealth, handing out large bonuses, offering constant shopping trips and writing checks for hundreds of thousands of dollars without batting an eye. Potential obstacles in Kara and Mike’s road to romance – her marriage, the trick he plays to be near her – are resolved implausibly. And while the back cover blurb suggests that Kara must choose between two men she loves, her husband has no redeeming features; there’s never any doubt about the outcome for Kara and Mike.

The story is replete with tedious detail, particularly around meal preparation and the characters’ fondness for Keurig coffee, pastries, cake and Chinese take-out. The novel also suffers from occasional grammatical and proofreading errors, as well as stilted dialogue.

Despite all, Twenty-Eight Days is a gentle romance with attractive older characters. Readers who can overlook the story’s flaws may enjoy escaping into Kara and Mike’s world.