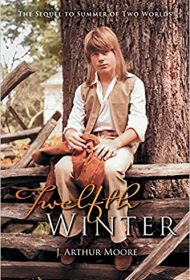 Twelfth Winter is an historical novel set in the late 1800s. The sequel to Summer of Two Worlds, it continues the story of Prairie Cub, a white boy raised by Native Americans.

In this installment, Prairie Cub, now age 12, is taken by white friends to a West Virginia town to live with the Tyler family and attend school. There, he adopts the name Michael Freeman, with the middle initials “PC” reflecting his birth name. He makes friends with whom he shares his native clothing and customs and learns how to operate a train, all while struggling with homesickness and balancing his separate identities.

The book’s historical setting feels well-researched, dramatizing the many chores needed to run a household in the 1800s and even touching on medical treatment before antibiotics. In addition, Michael’s emotional torment is powerfully depicted, as he often cries himself to sleep missing his family. Towards the end, he movingly unites both of his backgrounds.

The plot, however, lacks page-turning conflict. Michael’s adoptive family, the Tylers, are compassionate people who give him space to be sad. They let him wear moccasins around the house, as socks and shoes make him uncomfortable. While he’s initially nervous about revealing his background, everyone at school is friendly and accommodating, helping him catch up in subjects he’s unfamiliar with, like grammar and fractions. When he appears in class in full traditional garb, everyone is excited and eager to hear his story. Even the school bully becomes his friend after Michael challenges him to a Native American wrestling contest.

Furthermore, even though Prairie Cub killed an officer and was nearly killed himself in the previous novel, he seems to trust the white people in his life without hesitation. And while the book ends on a joyous moment, the conclusion feels rather sudden.

Without tension, the plot lags and feels unconvincing. Still, readers looking for authentic-feeling history and an easy style will find some rewards in Twelfth Winter.