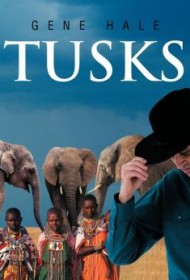 This is the first of two novels from author Gene Hale. In plot, it’s is a far cry from his second (Mercy, 2013), which is an inspirational story about a light heavyweight boxer. Tusks represents, instead, an ambitious mash-up of genres: modern-day Western, eco-adventure story, and geopolitical thriller.

Our hero is Cheyenne Cole, a rugged ex-Marine sharpshooter who travels to Central Africa on a mission to save wild elephants from poachers, a passionate cause of his late father. In addition to his sniper rifle, Cole sports a pair of deadly six-shooters, inspired by a trick shooter he saw during childhood named “Black Bart.” Cole partners up with another ex-Marine, Geigy DeBrown, and pairs up with Ebony, a local beauty whom Cole steals away from a proper villain named Python. The threat comes when Cole’s crew raises the ire of Python’s boss, a shadowy drug runner and arms dealer simply called the “Russian.”

This is a violent book: When he’s not fighting skirmishes against the Russian’s crew, Cole (dubbed “Hands of Lightning” by the local tribes) is gunning down poachers and tracking a pair of dangerous elephants called Black Mamba and Monsoon. Cole’s team eventually discovers that the Russian has secured a pair of long-range nuclear missiles from Al-Qaida and has aimed them at New York City and Israel.

Cole makes for a solid, square-jawed hero, but the cartoonish villains, squishy sex scenes with lusty love interest Ebony, occasionally corny dialogue (“Yes, my cowboy lover, let’s stay entwined like this forever – locked together as one for all eternity”) and outlandish plot twists give this adventure novel some hurdles to overcome.

All told, it’s an imaginative but far-fetched story cast in a testosterone-fueled mood that may put readers of a certain age in mind of those lurid men’s novels from the 1970s—although the 8-1/2 x 11 manuscript format totaling nearly 500 pages definitely doesn’t make this pocket-sized pulp fiction.