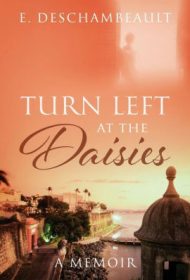 This frank memoir features some of the most powerful elements of the genre: a dysfunctional family dominated by a stern and cruel father; a dreamy young woman whose best hopes are compromised by a fateful choice in youth; an intense but tortured love affair. And most potent of them all: a satisfying dollop of redemption.

Massachusetts author E. Deschambeault is also the intrepid heroine Ann Deschambeault in this narrative, which is told in third-person. She is a memorable presence in the story, fending off the brutal criticisms of her flinty and bigoted sea-captain father, Zephaniah; navigating a complicated affair with a loving but self-centered young writer named Joseph Gaura and, most crucial, trying to allay the shame and guilt she feels after giving up Joseph’s and her newborn son for adoption when neither of them was prepared for parenthood.

The saga spans six decades (roughly, 1940-2000) and unfolds largely amid the rough beauty of the New England coast the author knows so well, with side trips to Puerto Rico and West Germany. The real locale of the story, of course, is Ann’s troubled heart. “Since losing her son, she was missing some inner source,” Deschambeault writes.

The author offers candid details and displays storytelling talent, but she doesn’t always marshal her forces well. Her chronologies sometimes sap this powerful tale of its momentum, revealing the deaths of key characters long before those revelations make good dramatic sense. Her writing also varies from the meticulous (a maiden aunt is “a brittle creature of thrift and threats”) to the overstuffed (“The bus jerked and hissed into Copley Square, lurched to an air-cushioned stop, soft and heavy”).

Fortunately for readers, Ann gets a hard-earned second chance to redeem herself, creating a satisfying conclusion to her story. Turn Left at the Daisies is unashamedly emotional stuff. With  skilled editing, it could become a thrum-the-heartstrings gem.