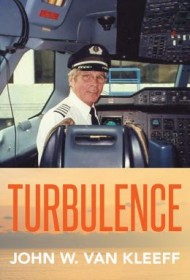 Turbulence tells the story of John W. van Kleef’s life, including recollections from his 35-year flying career, starting at ramshackle facilities and winding up as a successful American Airlines pilot. In between, he saw the world.

From childhood, van Kleeff, whose grandfather and uncle were Royal Air Force fliers, seemed destined to become a pilot. The defining event of his life came at age 6, when his father, an oil company executive living in Venezuela, decided to send his young son to live with a couple in Holland (the author paints a most unflattering picture of his father, with whom he never fully reconciled). Van Kleeff would reunite with his parents – who bounced around from Venezuela to Australia to the Canary Islands, among other locations – but only briefly before joining the U.S. military at 17.

He served in Vietnam, eventually volunteering to be a liaison officer in Saigon, a job he relished (“. . . to me, the taste of Vietnam was fine French wine and filet mignon.”) A lifelong fascination with technology and flying led him into aviation, which became his passion.

Van Kleeff tells his story engagingly. Straightforward and almost conversational, he combines tales of being a pilot with memorable personal events. The book is less than 200 pages, however, and one gets the feeling that it could be twice the size. Piloting the moneyed movers and shakers from the Arab world — including members of the bin Laden family and Saudi royalty — would seem to offer a deep well of stories. But van Kleeff only touches on those experiences, focusing more on his jobs, wives and girlfriends, and the travel he enjoyed.

In the end, we are left with an adequate, occasionally entertaining personal memoir. But this seems a missed opportunity: Had it presented a broader view of the author’s world, this book would hold much greater appeal to general readers.