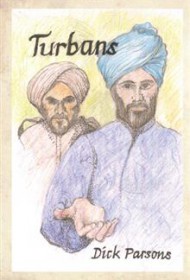 Set in colonial India during WWII, the historical novel Turbans centers around a young English woman who has recently learned that she is the product of a liaison between her father, “an English judge,” and an unidentified woman, which occurred during his family’s stay in India.

In search of answers, the young woman, Gertrude, sets sail to India.  As the story unfolds, she meets Richard, a naval officer with whom she falls in love, and Yuvraj, a soldier and Sikh, who rescues her at a vulnerable moment and alters her life forever. With the chaos and fear of war at the forefront of her mind, Gertrude must learn to navigate the waters of the unknowns in life and in love.

Author Dick Parsons often informs readers of Gertrude’s feelings and experiences through her diary entries (which are written in a different, sometimes inconsistent, font than the rest of the novel). Major plot points, including Gertrude’s falling in love with Richard, are told in brief synopses as memories, rather than unfolding in front of readers.

Readers are also introduced to the minutiae of war through Richard’s eyes. While Initially interesting, the barrage of ship names, battle locations, crewmember titles, equipment and weaponry inventories becomes overwhelming and does little to further the plot. Additionally, Parsons uses asterisks to denote words readers might need to look up and provides a glossary in the back of the novel. This practice (and the footnoted instruction with every asterisk to see the glossary for more details) proves distracting, as does an inordinate number of exclamation marks peppered throughout the narrative.

While history buffs will surely appreciate the historical detail in Turbans, the plot and characters suffer for it. At best, Parson’s novel feels like a history lesson. At worst, it reads like an unfinished patchwork of genres and stories, culminating in an implausible and unsatisfying plot.