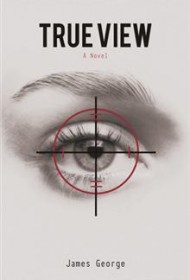 It’s a fresh and unconventional approach to combine the fairly traditional thriller plot (terrorist is loose in U.S., and an elite squad is trying to find him) with the unexpected (elite squad includes a remote viewer — someone who can put herself in different times and places merely by using the power of her mind). That’s what James George has done with True View.

George takes us into a world of ideograms, gestalts, matrixes, dowsing and other tools that our protagonist, college-professor-turned-remote-viewer Ashlee, uses to traverse the ethereal. Along with a group of special counter-terrorism agents, Ashlee goes on a road trip through the Southwest in an attempt to get the terrorist before he commits his mayhem. So as not to be at too great a disadvantage, the terrorist has his own remote viewer. Complications ensue.

The problem here isn’t so much with the plot, although it has elements that will leave readers scratching their heads. (For example, the anti-terrorism agents have chips implanted in their bodies so that their bosses know everything all the time, yet agents apparently can be blackmailed without another’s knowledge.) But the bigger problem is the characters, who are one-dimensional in the extreme; there’s little difference among them and little reason for readers to care about any of them. It doesn’t help that despite how good these agents are supposed to be, and how much technology and resources they have at their disposal, the terrorist routinely shows them to be inept, even though no one is going to confuse him with James Bond.

In the end, True View is a thriller that generates little of the pace and excitement that characterize the genre, and a story of supernatural abilities that asks more of the reader than a mere suspension of disbelief.