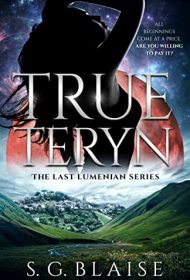 Doing the bidding of a goddess isn’t always simple, as the protagonist learns in True Teryn, the second installment of S.G. Blaise’s Last Lumenian fantasy series.

The book opens in the immediate wake of an epic battle against an archgod of chaos and destruction known as DLD, a monumental baddie who threatens the peace and harmony of the Seven Galaxies, Blaise’s imagined fantastical world. The only hope of stopping this villain is Lilla, the newly crowned sybil and “right hand of Archgoddess of the Eternal Light and Order.”

After failing to defeat DLD in the first book, Lilla receives orders from the Archgoddess to muster and lead an army to fight the god of destruction. Callum, Lilla’s Teryn fiancé, is more than willing to support her cause, but his father, the Teryn Emperor Caderyn, isn’t so keen on letting a 19-year-old sybil command his planet’s army. To win over Caderyn, Lilla must earn the Teryn Guardian Goddess’ Laoise’s blessing. That means recovering an ancient talisman, the Heart Amulet, a task that Lilla must complete with the aid of allies.

Blaise accesses an imaginative world of magic, mysticism and action, offering readers a complex, immersive and sometimes daunting mythos. A glossary at book’s end details the convoluted history, pantheon and other elements of the Seven Galaxies.

Happily, Blaise balances her intricate world with excellent character building and human drama. Even as Lilla deals with the demands of a life-or-death battle, she navigates the emotional demands of her budding relationship with Callum, the needs of her goddess, the loyalties of her friends, and a bull-headed future father-in-law. The author brings these inner struggles to life with clarity and empathy, and the book’s relatable characters serve as a constant anchor.

Fantasy fans will find plenty of action, magic and wonder in this fast-paced story, all enhanced by Blaise’s clear investment in her well-drawn and intriguing characters.