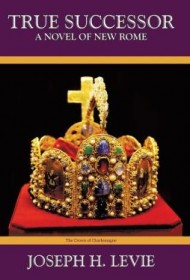 True Successor is a work of alternate history, the genre that combines historical fact with broad speculation. In this case, the question is: what would have happened if the Roman Empire had survived instead of collapsing? The answers are numerous.

Set in 1812, the story opens in Sapoda, a town sandwiched between New Rome and the Mongol Empire. Mikhail de Reuter is a low-level officer stopping in to see his girlfriend when an abrupt change in fortune finds him serving the Emperor of New Rome while dodging a group of Mongols bent on his capture. Along the way, there are battlefield adventures, moments of political intrigue, and a few romances as well.

Author Joseph Levie creates a plausible world that gives historical fiction fans plenty to explore. Readers with little to no knowledge of Roman history may struggle to follow the plot, for fear of missing some of the imagined changes in the historical landscape, but the characters and setting will keep them engaged.

General-interest readers are likely to gravitate toward the few chapters that look at day-to-day life in New Rome, from commerce to community festivals; they’re among the book’s best, along with some well-choreographed battles. When the town is crowded, for example, “The rich do more than shop. Deals are done. Money changes hands. Backs are scratched and often knifed.” In passages such as this, Levie brings a sly humor to the story that keeps the high-stakes battles from overwhelming the novel as a whole.

There are a handful of sentences left unfinished in a way that suggests printer error rather than grammatical oversight, but they don’t detract mightily from the story. Levie balances a complex plot with enough well-wrought description to ground readers in his vision, making True Successor a nice addition to a genre that artfully re-imagines reality.