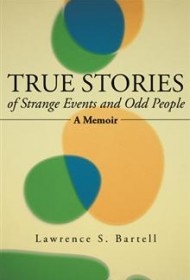 A professor emeritus of the chemistry department of the University of Michigan, Lawrence S. Bartell has stepped outside his academic role to publish a collection of personal vignettes and snippets “accumulated over a lifetime.”

Bartell had a long distinguished career: He worked on the Manhattan Project, published more than 300 scientific articles, and attended international conferences in the Soviet Union, China, Japan, Bulgaria, Hungary, Egypt and elsewhere. Each chapter of his memoir follows a general theme, with personal memories ranging from youthful frolics to world travels with his wife Joy. These stories are about everything from encounters with high-level scientific icons (Al Cotton, “the Pope of inorganic chemistry”) to mundane incidents involving a family pet or choice of car brand. Parts of the book recall his experiences in the Navy, (he was mustered out with rheumatic fever two months after World War II ended), citing humorous examples of military incompetence.

Although some of these stories are rather trivial (looking for bathroom facilities in Italy, for example), they reveal the author’s sense of humor and dynamic personality.

Unfortunately, much of the book concerns science and scientists and is laden with terminology from the realm of chemistry and physics that will be largely incomprehensible to lay readers. The message that general readers may grasp is that scientists are people, too, and many of them are destined to become curmudgeons; as often as he lauds a fellow scientist, Bartell refers to another as “disagreeable” or “disturbed.”

True Stories of Strange Events and Odd People might more comprehensibly have been two books: one about Bartell’s family, travels, and home life; and another focusing on his meetings with scientific peers. As it stands, the overall impression this memoir leaves is of a highly intelligent man who has spent much of his life associating with people of similar genius. Appreciative readers will likely be family, friends and those who admire the author’s scientific accomplishments.