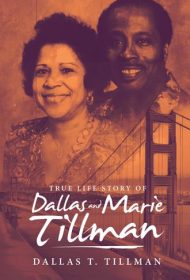 Dallas Tillman describes life in Mississippi and California during times of social change in his memoir, True Life Story of Dallas and Marie Tillman. The book includes many family photos.

In rather disorganized but chatty prose, Tillman describes doing farm work as a child in Mississippi before moving with his mother and brother to Vallejo, California. They then relocated to Fairfield, California, where Tillman was a successful high school athlete before he set out on his own, moving to San Francisco in 1961.

While working as an encyclopedia salesman, he met the married woman he would eventually marry himself. They were together for 53 years until Marie’s death from pancreatic cancer, and Tillman describes his various career moves as well as their lives as a couple.

Just making that much sense of the book proves to be a challenge, though, as the writing is often ungrammatical, with long, run-on sentences, and sometimes nearly impossible to decipher. One paragraph that takes up an entire page includes an anecdote about finding “a wreck ship and we explodes father and found a long rusty trunk… with a big rusty pad lock on it…we went to my dad shed he had built, and got tools and busted the lock, we hadn’t seen so many red pennies they was all cake to gather…” On the same page, Tillman mentions growing “wallomelion” in their garden and his father using “dynamint” to clear trees. When telling a story, the author often repeats the same line three or more times.

If the book is intended for family enjoyment, True Life Story will be appreciated for its recollection of the author’s struggles with hard times, while emphasizing the good moments. A general interest readership will be lost in the jumbled language, however. To attract a wider audience, the text requires significant editing.