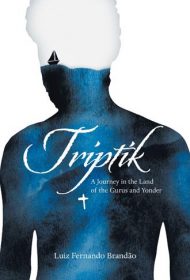 In an erudite, personable and humorous voice, Luiz Fernando Brandão recounts in Triptik his epic spiritual and physical journey from Brazil to India from 1975 to 1976 at the age of 23.

The memoir opens in Brazil, with Brandão’s decision to study yoga in India. Soon, an opportunity arrives and he boards a cargo ship with a Greek crew and sets sail for Kuwait. There, Brandão finesses a way to India where he commences a six-month intensive yoga study at The Yoga Institute in Mumbai.

The story then details the author’s daily life, both spiritual and ethnographic, as he trains to become a yogi and learns about India. Readers will find yogic philosophy interwoven with the quirky and deep encounters Brandão experiences with fellow European, Indian, Brazilian, and Japanese students.

Triptik’s final part describes Brandão’s roundabout return to Brazil, traversing Pakistan, Afghanistan, Iran, Turkey, Germany, and France before arriving in England. Along the way, he stumbles into and learns about each new culture, reconnects with friends, and finds new adventures, some yogic, some purely physical. Funds all but spent, Brandão boards another cargo ship, in Scotland, and returns home, concluding that although the world is wildly diverse, “we are basically all the same.”

Triptik delightfully recounts a decade roiled by social movements and the Cold War, but also defined by daring, long-distance travel before the advent of the Internet or more open borders. Unfortunately, the text suffers from structural problems. Brandão writes that he used his diary and trip notes to construct his narrative. Yet the book still reads like a loosely organized journal, almost as if transcribed from his original notes. This sense is underscored by its present tense narration and many juxtaposed paragraphs containing unrelated scenes or time frames. Readers are often uncertain what day, week, and month the author is writing in.

Those willing to overlook such issues will find Brandão’s journey interesting and daring as he enjoys unmapped adventures and delving into the study of yoga far from home.