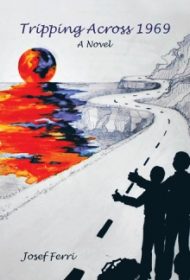 In Josef Ferri’s Tripping Across 1969, young Daniel Cottone crosses the country, immersing himself in the era’s music and politics as he searches for meaning in his life.

In 1969, Cottone is still recovering from the loss of his first love, and has recently quit his well-paying job at Bethlehem Steel because of its contribution to the Vietnam War. He’s also drawn the “dreaded” 1-A draft status, heightening his need to enjoy life while he can.

He and friend Mac travel the country from their Buffalo, N.Y. home, taking in concerts, including the famed Woodstock. After Cottone is arrested in Southern California for wearing cutoffs adorned with a rendering of the American flag, followed by other “unusual challenges and bizarre situations,” the pair hitchhike north, at one point landing a ride with political activist Angela Davis. But a theft mars their visit to San Francisco, and they return home to continue their travels another day.

The story is built on the cultural revolution of the ‘60s, and the detail, color and characters of the time are well rendered, as is Woodstock and the “counterculture disillusionment.” But the story can be hard to follow as Ferri jumps around in time. For example, the story starts in California with Cottone’s arrest, then goes backward in time to Woodstock, then forward again to Cape Cod, and so on.

Information is repeated, such as when Ferri describes the Beat poets, followed a page later by the same information. Additionally, there are confusing inconsistencies: Cottone travels with the duffel bag that once belonged to his friend, Jack, killed in the Vietnam war, but a few pages later, Jack becomes Ben. It’s also puzzling that the book is classified as a memoir on the back cover, while labeled “A Novel” on the front.

Such issues are problematic, although anyone who lived through the era, or is intrigued by it, may be willing to overlook the missteps for the cultural depiction.