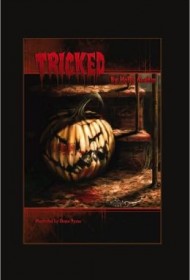 If your kids love sitting around a campfire listening to ghost stories — in this case, super-ghastly ghost stories — this one is for them. Gaskin spins a horror story for the pre-teen set that’s not for the faint of heart.

Tricked is actually a long short story, set on Halloween. It’s the first time 11-year-old Patrick has been allowed to trick-or-treat without a parent. The catch: he has to take his six-year-old sister Mariah along, and he has to follow the route his mother has approved. He has every intention of obeying, until his friends pressure him into visiting a house off the route with an awesome Halloween display. On the way, Mariah runs off, setting the horror in motion.

Patrick soon learns that Mariah has accepted a ride in a car driven by the mother of a friend Mariah hasn’t seen in a long time. When the mother swings around and offers Patrick a ride, too, he jumps in — only to realize that the mother and her daughter, who is sitting in the backseat, had actually been killed in a car accident on Halloween two years ago. His parents hadn’t told Mariah, fearing she would be traumatized.

No need to reveal what happens next, except to warn parents that events unfold in a highly graphic and potentially disturbing way. Tricked is much closer to the scary books by Alvin Schwartz than R.L. Stine’s light-hearted Goosebumps tales. Children prone to nightmares should keep this book at arms-length! (On the other hand, those who can take it in the spirit it’s intended — as a creepy, campy ghost story — may be delighted.)

Gaskin writes with an assured voice and sound instinct for character development, though her pacing could be faster. The book has some typos and at least one inconsistency that could have been caught by a sharp editor, but none of this gets in the way of a well-drawn, chilling read.