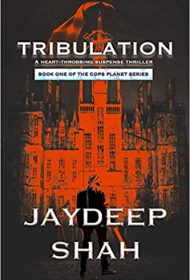 In this slim suspense novel, two murderers fear that the ghost of their victim has risen to bring them to justice.

Alex Fuentes and his wife Casie take anger to a new art form: tormenting their servants; toying with people for personal gain; murdering at will. The story flashes back six years earlier, when a naïve young lady named Ana randomly meets Alex in a coffee shop. Alex offers to help her find an accounting internship. But who is he? And how does he know so much about her?

Later, after talking with her best friend Emily, she decides to meet up with him after all. Then she receives a mysterious phone call telling her that Alex was the one who murdered Ana’s father and that she should come to Fuentes mansion at once. Intrigued, she complies, and an encounter ends in a bloody confrontation.

Six years later, Casie and Alex are celebrating their anniversary at the mansion, only to find a mysterious visitor wandering around with the dripping blood and disarray of their long-ago crime.

Author Jaydeep Shah attempts to combine suspense with a touch of the paranormal. And for a short while, readers will be intrigued. But ultimately, the story reads more like an outline than a fully realized novel. The characters are flat; their motives unexplained. Why are Alex and Casie so angry all the time? Why doesn’t Ana tell her brother, a police officer, what’s happening? And then there’s the ultimate contrivance: Ana’s friend Emily is about to report the crime as Ana faces down Alex and Casie but, well, there’s no cell phone service, and then her battery dies.

Although Shah’s writing style is pleasant, he would be well served to spend more time on techniques such as foreshadowing. Instead of focusing his efforts here on a cliff-hanger for the sequel, he would be wise to strengthen this book so readers will want to follow to the next.