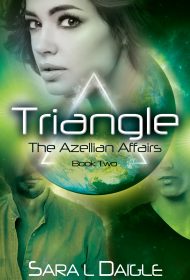 A smooth blend of science fiction and romance, the second installment of Sara L. Daigle’s Azellian Affairs saga (after Alawahea, 2015) continues the story of Tamara Carrington, the University of Denver student whose love triangle with two aliens threatens to not only destroy her life but also the tumultuous relationship between two planetary civilizations.

Tamara has recently learned that her biological mother was Azellian (human-like aliens from the planet Azelle who have telekinetic abilities and are rumored to be gifted in bed). Psychically connected to Merran, an ambassador from Azelle, and Alarin, an exchange student from that planet, she must deal with an even bigger revelation when she learns that she’s pregnant.

Complications arise quickly when Merran, unaware of Tamara’s pregnancy, effectively breaks up with her to concentrate on career demands. Meanwhile, Alarin recognizes that if the baby is his, he will face potential fallout from his politically important family back home. Once Merran learns of Tamara’s situation, the three must plot a course through treacherous social and political minefields to devise a plan that’s not only best for the child but all three adults.

Although hardcore science fiction fans might find the futuristic elements too muted, romance readers will applaud Daigle’s emotionally intense saga, which revolves around an endearing heroine and her relationships. This is a high-quality release—from the exceptional editing, eye-catching cover art, and tightly woven storyline, to the subtle thematic exploration of the power of love, forgiveness, and redemption. Readers will surely savor the story.