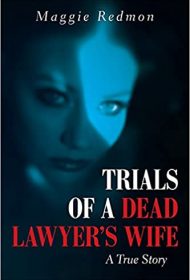 Trials of a Dead Lawyer’s Wife is the true account of author Maggie Redmon’s search for answers after her soon-to-be ex-husband Scott dies while with a woman with a checkered past.

After seven happy years of marriage, Scott, a recovering addict, is prescribed pain medication after surgery, reigniting his addiction. Redmon sees him through his darkest days, in which he loses his law license and incurs thousands of dollars of debt in her name.

Ordered into rehab, Scott meets Brandi Scruggs, a fellow patient and blacklisted home health nurse/EMT. Within weeks, Scott and Brandi move into an expensive apartment, he demands a divorce, and secretly replaces Redmon with Brandi as the beneficiary of half of his estate. The day after the papers are signed, Scott dies.

The cause of death is ruled to be a small brain aneurysm, but Redmon suspects Brandi was involved. Yet her pleas for an exhumation of Scott’s body for a thorough autopsy go unanswered.

Confident, witty and smart, Redmon is easy to like. She moves deftly from grieving widow to angry, scorned wife, and offers an unflinching glimpse into life with a much-loved addict.

Unfortunately, she falters in the role of medical investigator. For reasons never entirely clear, Redmon fixates on the idea that Brandi poisoned Scott with antifreeze. In demanding specific new tests be performed on Scott’s kidneys, she rehashes events already discussed and inundates readers with wearying in-depth passages about post mortem procedures.

Toward the end, Redmon’s long lost college love, Goat, appears. Now a respected cop, he connects her with people who might take up her cause. Oddly, though, when tying up loose ends in the epilogue, Redmon updates readers on many of the story’s personalities, but Goat’s fate is inexplicably absent.

While interesting and entertaining throughout, Trials of a Dead Lawyer’s Wife delivers a disappointing and unsatisfying end. Readers might find it a worthy investment, however, just to spend some time with the companionable Redmon.