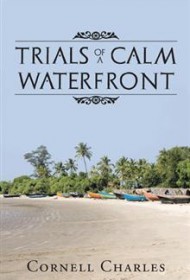 In this quirky, short novel, the residents of a seaside village on Saint Lucia are at odds over the development of a hotel resort, until a natural disaster settles the matter for them.

The government and the developers of Pointe Sable are leading the charge to relocate the villagers inland, with promises of a better life. But the opposition, led by Victor Provident, argues that the villagers, who are predominantly fishermen, are happy with their simple lifestyles and their connection with the sea.

While similar conflicts have proven excellent fodder for many other novels, this slim volume falters in its overwritten approach to its subject matter. The narrative is full of pompous speeches on both sides of the argument for and against progress, even though readers know early on how the arguments will come out. Victor, whose last name is an obvious tipoff, says, “…A generation of fishermen cured and preserved by the salt of the sea exiled on the mountainside will cause the dormant spirits of ancestors to rise out of their ocean beds in protest and cause a calamity to afflict the island.” Yet when the foreshadowed natural disaster occurs, it’s brought up and dispensed with on the last two pages of the book.

The novel is at its best when it shows life in the village: The Christmas chapter where the villagers are disappointed at a living nativity scene that features live animals but a plastic baby Jesus is classic. There are also moments of sly wit.  For example, one of the characters tries to recall another character by asking “Is it a woman with a big, big backside, the people calling her ‘Studebaker’?”

Readers might have found it worth wading into the waters of this book for these kind of redeeming moments, were it not for the larger issues. As it is, only those with great patience and perseverance will want to brave the depths.