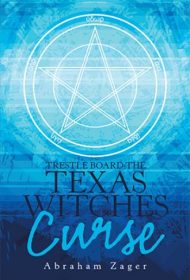 Abraham Zager claims to be recounting true events of 2010-11 in Trestle Board the Texas Witches Curse, a deeply strange, extremely violent, and funny (sometimes unintentionally) narrative.

The bare bones of the story are as follows: When Zager tries to recover money he’s owed by an employer, the man vows revenge and turns to a satanic coven to exact vengeance on Zager. They move into an apartment next to his, set up surveillance and sneak in at night to drug him and plant head lice, spider eggs and other things in his scalp. His cat attacks them, sometimes doing grave harm, as Zager tries to get them to leave him alone.

This is a wild ride. Each chapter is named for and opens with a Bible verse. Zager describes the coven members as using “Santa Ria” – apparently meaning Santeria, a somewhat magical Cuban religion with African roots – and gives them jaunty bios: One drug runner “kills many young girls for fun and Satanic power. He’s also a skilled carpenter.”

Zager describes what happens while he’s awake but also events that take place after he has been dosed with chloroform. It’s all very difficult to follow and rather hard to believe. His cat is an irresistible character, though, fighting off his enemies in ways that range from slapstick to heroic.

Were it written as a novel, this story would still need work to make sense: If the coven were truly powerful, for example, why would they spend untold thousands of dollars just to give someone skin problems? And while the book describes their ghoulish violence against women, the protagonist faces nothing a good shampoo couldn’t fix.

Readers who like extremely unhinged horror with a sense of humor might enjoy this, but the story slides off the rails so often that it qiuckly loses its way.