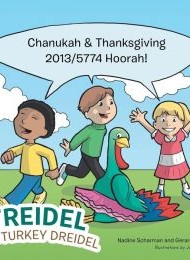 In this colorful picture book, a talented turkey is pardoned at Thanksgiving because he brings joy to children—and turkeys—across America. Treidel the Turkey Dreidel presents scant plot, but young children will still enjoy the bright illustrations and unique, if rather nonsensical, premise.

Treidel is a turkey who loves twirling like a dreidel. His skill delights the neighborhood children and even the farmer who owns him. Treidel teaches his technique to other turkeys on the farm, leading to a veritable rainbow of whirling turkeys.

The conflict here is resolved before it is introduced, since the farmer preemptively declares that Treidel will be safe from Thanksgiving slaughter. This is related, the book suggests, to the fact that Thanksgiving and Chanukah fell on the same day in 2013. The President of the United States also pardons the lucky bird. (No mention, unfortunately, is made of Treidel’s disciple turkeys.)

Glossy, professional illustrations help bring Treidel and his radiating joy to life. The text is sparse, allowing the illustrations to be emotive and engaging on their own. Since the story is clearly intended for very young readers, the minimal stage setting and conflict are acceptable, but a clearer plot arc would have brought a greater degree of emotional engagement and given young readers something to take away from the story, which ultimately lacks a moral.

The role of Judaism could have also played a more significant role, since it is mostly relegated to a rather strange and awkwardly worded line at the end: “[the President] gave Treidel an official pardon so he could live and represent all Jews and all Americans everywhere.” In addition, the 2013 Chanukah/Thanksgiving reference lends the book an outdated feel.

Overall, Treidel the Turkey Dreidel is a colorful, fun and certainly unique book that very young children can follow during story time. That said, however, the thin plot only allows for a surface-level read, and the novelty may quickly wear off for many.